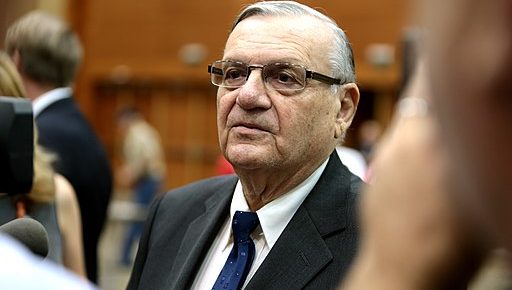 Abusing the Pardon Power: From Joe Arpaio to the Latest Revelations About Trump’s Lawyer

The connection between disgraced former Maricopa County, Arizona Sheriff Joe Arpaio and disgraced former National Security Advisor Michael Flynn may not be immediately obvious. But we predicted it in 2017.

The New York Times recently reported that Special Counsel Mueller’s team uncovered a voicemail from Trump’s lawyer, John Dowd, to Flynn’s lawyer. The message is full of Dowd hemming and hawing, but as the Times dryly reported, “One way of interpreting the episode is that Mr. Dowd was telling Mr. Flynn not to provide the government with damaging information about Mr. Trump even if he cooperated in other ways, and suggesting that Mr. Trump might reward his loyalty with a pardon.”

It’s true that the message doesn’t capture Dowd explicitly dangling a pardon to Flynn in exchange for not testifying against Trump. But, as we explained almost two years ago, Trump had already laid enough groundwork for Flynn to fill in the blanks, when he pardoned Arpaio back in August 2017.

As we explained in detail in Chapter 5 of The Constitution Demands It: The Case for the Impeachment of Donald Trump (and much more briefly here), President Trump’s pardon of Joe Arpaio was, in and of itself, a flagrant abuse of the pardon power. It was the first time in our nation’s history that a president pardoned a public official convicted of criminal contempt of court for willfully disobeying a court order to stop violating individuals’ constitutional rights.

For that reason, we’ve been fighting the Arpaio pardon in court since 2017. The case United States v. Arpaio is still in the courts, mostly at Arpaio’s own insistence: he wants not just to be pardoned, but for his conviction to be vacated, as if it had never happened. We’ve been working together with allies to fight Arpaio’s claim in court: not just his request to have the conviction vacated, but the pardon itself.

The most recent development in that case is that on April 29, 2019, we joined a bipartisan coalition of organizations and legal experts (see bottom of page for full list) in filing an amicus brief in the U.S. Court of Appeals for the Ninth Circuit explaining that President Trump’s pardon of Mr. Arpaio was unconstitutional and, therefore, invalid. The pardon of Arpaio abuses the pardon power by undermining the ability of the courts to use the contempt power to protect individual rights against government encroachment.

That wasn’t the only problem with the Arpaio pardon. As we (with former Nixon White House Counsel John Dean) wrote in TIME in October 2017, “Arpaio’s pardon sent a signal that reverberated in Washington. For Trump’s current and former associates embroiled in Special Counsel Robert Mueller’s Russiagate investigation, the message is unmistakable: don’t cooperate, and I’ll pardon you.”

Dowd didn’t need to use the word “pardon” in his voice message because the context was already clear. Back in 2017, we explained this as a predictable outcome of the Arpaio pardon:

First, the timing: … The fact that Trump is willing to pardon and praise a polarizing figure like Arpaio after just seven months in office is telling. It indicates that he will not likely worry about political blowback from pardoning former subordinates who could implicate him in wrongdoing, whenever he feels it is necessary.

Second, the crime: Arpaio was convicted of contempt of court for disobeying a court order. The pardon signals to Trump’s current and former aides that, if they are threatened with contempt for refusing to testify, he will pardon them too. This president is not troubled by the separation of powers.

Third, the motive: [O]ne effective way to send the message that “if the heat gets too close, hold tight and I will pardon you” is to pardon someone else. Ideally, someone just as controversial — someone like Arpaio. That gives the president plausible deniability. Manafort, Flynn, and other Trump associates understand the signal, but the president can deny that he encouraged them not to cooperate with law enforcement.

In the meantime, the Arpaio case is fully briefed in the Ninth Circuit, and will be argued in San Francisco this fall.

We were pleased to participate in the amicus brief in United States v. Arpaio as part of a coalition including: Protect Democracy, Citizens for Responsibility and Ethics in Washington (CREW); The Coalition to Preserve, Protect and Defend; Free Speech For People; MoveOn; Republicans for the Rule of Law; the Roderick and Solange MacArthur Justice Center; Laurence H. Tribe; Martin H. Redish; Lawrence Friedman, and William D. Rich.

Learn more about the Arpaio case.