The Free and Fair Elections Amendment 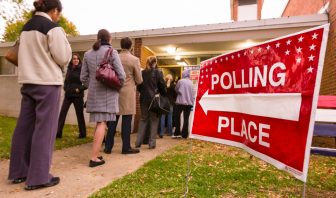 Free Speech For People has developed the Free and Fair Elections Amendment to end the big money dominance of our elections. This proposed amendment sets limits on federal campaign contributions and spending; prohibits corporate spending in the political process (as existed prior to the Supreme Court’s ruling in Citizens United v. FEC); requires Congress to develop a system of public campaign financing for all federal candidates who qualify for the ballot; and allows the States to set reasonable limits on campaign contributions and spending in state and local elections. The amendment overturns Citizens United and other Supreme Court rulings which have so threatened our democracy.

We also endorse the Democracy For All Amendment (S.J. Res. 51; H.J. Res. 2), which allows Congress and the States to set limits on campaign contributions and spending, and we endorse the We the People Amendment (H.J. Res. 48) which states, in part, that Congress shall regulate campaign contributions and spending. We believe the Free and Fair Elections Amendment is preferable because it will establish, upon enactment, key contribution and spending limits and it will ensure a strong public financing system for all federal candidates who qualify for the ballot, thereby leveling the playing field for candidates regardless of their access to wealth.

Click here to learn more about the growing threat to our democracy from big money interests, how we can fight back with the Free and Fair Elections Amendment, and the series of Democracy Amendments we endorse!

Read the text of the Free and Fair Elections Amendment

The Free and Fair Elections Amendment

Resolved by the Senate and House of Representatives of the United States of America in Congress assembled (two-thirds of each House concurring therein), That the following article is proposed as an amendment to the Constitution of the United States, which shall be valid to all intents and purposes as part of the Constitution when ratified by the legislatures of three-fourths of the States:

SECTION 1. To advance democratic self-government and political equality, and to protect the integrity of government and the electoral process, the right of citizens of the United States to vote in elections in which campaign contributions and spending are subject to enforceable limits as set forth in this article, shall not be abridged by the United States.

SECTION 2. In any calendar year, no person may spend or contribute more than one hundred dollars for the purpose of influencing any other person’s election for the office of Representative, Senator, President, or Vice President; nor spend for the purpose of influencing elections, including their own, for the offices of Representative, Senator, President, or Vice President, or contribute to candidates for such offices, their campaigns, or political parties, more than an aggregate total of one thousand dollars; provided that Congress by law may prescribe lower limits and may periodically increase the amounts set forth in this section, but only to the extent required by changes in the value of money.

SECTION 3. No corporation or other entity created by law shall contribute or spend any amount for the purpose of influencing any election for the office of Representative, the Senate, the President, or the Vice President; but a political party or candidate’s campaign may spend the amounts prescribed by law.

SECTION 4. Within sixty days after ratification of this article, Congress shall enact legislation: To limit the amounts that candidates, their campaigns for the offices of Representative, Senator, President, or Vice President, and political parties may spend on such candidacies;

To provide public funding for all candidates who qualify for any primary, general, or special election ballot for Representative, Senator, President, or Vice President in any State or in the District constituting the seat of Government of the United States, equaling at least eighty percent of the amount that may be spent; but for candidates for President or Vice President, Congress shall prescribe by law the manner in which such amount shall be apportioned based on the States or District wherein such person qualifies;

To require disposition to the Treasury of unspent campaign funds after each election, without compensation; and

To enforce, with civil and criminal penalties, the limits and prohibitions in this article.

After one year from ratification of this article, no Senator or Representative shall receive any compensation or other emoluments from the United States during or for any period of time in office in either House during which the legislation required by this section shall not have been in effect.

SECTION 6. The States shall have power to implement and enforce reasonable regulations on the raising and spending of money by candidates and others to influence state or local elections, including but not limited to the limits and prohibitions in this article.

SECTION 7. This article shall not be construed to grant Congress or the States the power to abridge the freedom of the press.

Special Reports on Money in Politics