Organizing to get big money out of politics is frequently missing the voices of those who are the most marginalized by the failings of our democracy. Public discussions about money in politics and corporate rights can feel disconnected from people’s everyday realities because they focus only on concerns like the increasing amounts spent on elections, the donors and companies benefiting from the pay-to-play system, and Supreme Court cases like Citizens United, which have blocked our representatives’ ability to rein in the influence of big money.

Too often, efforts to limit the dominance of corporations and big money, and even conversations about these problems, have failed to consider how our big-money system hurts people marginalized by systems of oppression like structural racism and white supremacy, heteronormativity, transphobia, misogyny, and xenophobia. Pro-democracy organizations recognize the lack of diversity and want to engage more communities, especially communities marginalized by systems of oppression, but often do not have the tools to do so. As a result, we have collected some tools as a starting point.

First, what is intersectionality?

Why We Need an Intersectional Democracy Reform Movement

Those who experience the most harm from the unequal influence of money in politics are usually those who already face discrimination, oppression, or domination in other areas. A political system that favors the wealthiest few is particularly harmful for Native people, Black people, people of color, queer and trans people, and other communities who have been systematically excluded from economic opportunity. Our allies at Demos have written about both the racial wealth gap and how the racial bias in our big money political system undermines our democracy. We know that:

Talking about money in politics without talking about systemic oppression ignores some significant structural challenges, which makes us less effective. Also, society and the money in politics movement are missing out on unique and valuable voices, which could allow us to build a more thoughtful and critical movement that would truly help everyone. The most successful movements to expand democracy have been multiracial, so imagine a movement with even more intersectionality and inclusivity.

How to Promote Intersectionality within the Movement

Historically, organizing to get big money out of politics has been driven largely by straight, older, white, and male leaders, which means we are frequently missing the voices of those who are the most marginalized by the failings of our democracy. We need to actively work toward centering and listening to voices that are the most systemically excluded, as well as working toward understanding – in our own spaces – how power dynamics and privilege play a role in the advocacy we do.

Free Speech for People and Demos discussed how to promote intersectionality on this Every Voice Podcast.

Where do we start?

Free Speech For People has been working with other pro-democracy organizations to create an initiative that will provide people with some tools and resources to work toward engaging necessary communities in the fight for democracy and to make us a fully intersectional and inclusive movement. In partnership with Demos, we created a flexible framework for events that, instead of centering scholars and leaders in the money in politics advocacy community, centers the communities we are trying to reach. We developed this framework through our experience organizing events in Boston and D.C. on how money in politics affects the queer and trans communities. When planning these events, we worked with many other pro-democracy organizations as well as organizations in the queer and trans community to create a space for trans and queer activists to talk about how big money affects their advocacy. Free Speech For People has also worked with Move To Amend to host a national webinar on how to promote inclusivity and intersectionality in the pro-democracy movement.

Below are materials and recommendations for how to work toward making our movement more intersectional.

Initial Guides for Centering Communities Marginalized by Systems of Oppression 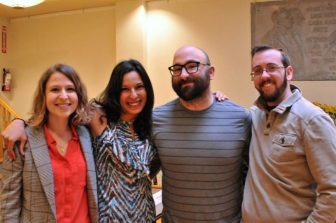 A framework for events that center voices and communities marginalized by systems of oppression written by Jasmine Gomez (Free Speech For People) with comments from Allie Boldt (Demos).

A podcast dedicated to intersectionality in the money in politics movement, and the Centering Marginalized Communities intersectional framework.

Demos provides a great background reading to understand some of the impacts money in our political system has on racial equity.

Video and Materials from Intersectional Events

A central resource listing for how money in politics affects the LGBTQ+ community.