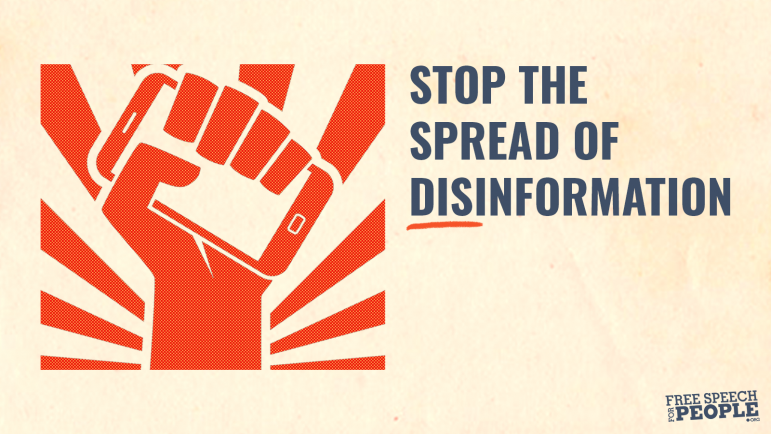 Free Speech For People announced the introduction of the Big Tech Accountability Act, a uniquely bold and comprehensive proposal to hold social media companies accountable for amplifying disinformation and violence through their online platforms. The Big Tech Accountability Act takes direct aim at the spread of false information and threats of violence online which preceded the insurrection at the US Capitol on January 6, 2021, and which has also served as an key instigating factor in other instances of violence worldwide. This insurrection was symbolic of a larger problem. A handful of global corporations have taken control of the internet, the dominant medium of all modern communication and commerce, and have used that control to create and sell databases of personal information of all Americans and to promote unprecedented amplification of dangerous disinformation and violence. This has created a grave threat to our democracy and our people. In the face of this threat, our elected officials have failed to take any meaningful action. The Big Tech Accountability Act will directly address this threat and will protect our democracy.

Exxon knew for decades that the burning of fossil fuels would cause climate change, resulting in a devastating impact on our global environment. Yet, for decades, the company hid that evidence from the public and its own shareholders.  Now, the Massachusetts and New York state attorneys general are investigating whether Exxon committed fraud by misleading shareholders and consumers.

LEARN MORE ABOUT OUR LEGAL CHALLENGE AGAINST EXXON!

Contaminating the Courts: A Joint Report by Free Speech For People and Greenpeace

Free Speech For People joined with Greenpeace on the report, Contaminating the Courts: The Corporate Campaign to Misuse the Constitution to Attack the Environment, to challenge corporations claiming constitutional rights to avoid accountability under the law. With this report, Greenpeace and Free Speech For People trace the history of the coordinated corporate strategy to distort constitutional rights into tools to thwart environmental and consumer protections, including attempts by Exxon Mobil to claim free speech rights following the uncovering of decades of misleading statements by the company regarding the impact of fossil fuels on climate change.

Exxon’s attempts to shield itself from longstanding securities and consumer protection laws by invoking the right to free speech is one of the most high-profile and most outrageous examples, but it’s only one of many corporations using this strategy to re-write the Constitution for its own purposes. Relying on a playbook that was written by none other than Supreme Court Justice Lewis Powell (while he was still on the payroll of tobacco giant Philip Morris), corporations are using fringe legal arguments not only to challenge common sense regulations to protect the environment and public health, but they are also using the threat of litigation to intimidate public officials and derail plans to fight back against corporate polluters.

“Corporations, the Constitution and Democracy” With Loyola Law School

Demos and Free Speech For People represent a coalition of local and national organizations that helped pass Seattle’s “democracy voucher” program, a nationally-recognized public campaign financing system enacted by voter initiative in 2015 and first used in the city’s 2017 election. Our joint amicus brief helped defend the city against a constitutional challenge in Washington state court by property owners. As our brief argued, the democracy voucher program serves important First Amendment interests in strengthening local democracy in Seattle by combating corruption, increasing political access and participation for low-income people and people of color, and enabling candidates to fund their campaigns without relying on out-of-town donors. The Washington Supreme Court upheld the initiative.

We celebrated a victory as the U.S. Supreme Court declined to hear 1A Auto, Inc. v. Sullivan, a challenge to a Massachusetts state law banning corporate contributions to political candidates. Free Speech For People worked with Common Cause Massachusetts on an amicus brief in the state supreme court. This case is important for several reasons. First, the case was clearly conceived by the Goldwater Institute not just as a challenge to a Massachusetts statute, but as a vehicle to try to persuade the U.S. Supreme Court to strike down bans on contributions from corporations to candidates. Second, we succeeded in complicating the case to keep it out of the Supreme Court. And finally, looking forward, the Massachusetts court’s decision lays additional legal groundwork in an important concurring opinion.

Free Speech For People provided support and co-wrote a bill with Representative Keith Ellison’s (MN) office to limit corporate felons’ ability to influence elections. The bill is an important step forward in keeping corporations out of our elections — especially corporate felons.

Free Speech For People, Courage Campaign, Equal Justice Society and Western Center on Law and Poverty, filed an amicus brief in support of the City of Los Angeles and its new hotel worker “living wage” ordinance against an Equal Protection Clause challenge from the American Hotel & Lodging Association. The suit also contends that the City’s ordinance violates state and federal equal protection clauses by unfairly targeting a single industry.

In 2014, Free Speech For People joined the legal team defending the Take Back St. Louis ballot initiative campaign. This ballot initiative, which would amend the city charter of St. Louis (Missouri) to prevent the city from granting tax breaks to fossil fuel and nuclear mining companies, was challenged in court before the ballots were printed. At the preliminary injunction stage, the judge (citing Citizens United) found that the initiative would violate the Equal Protection Clause of the Fourteenth Amendment, as well as state law. We joined the campaign’s Missouri-based legal team, acted as trial counsel, and wrote a significant portion of the post-trial brief. Unfortunately, the judge continued to rule against the campaign. We helped write the appeal brief, but unfortunately the appeals court upheld the trial court on state law (not constitutional) grounds.

We joined Global Witness Limited in an important brief  pushing back against a First Amendment claim by the National Association of Manufacturers and other corporate interests. The companies challenge a federal law requiring publicly-traded corporations to disclose whether their products use “conflict minerals” from the war-torn Democratic Republic of the Congo. This would help investors and customers understand which companies trade in conflict minerals that may benefit armed warlords. But the companies claim that this disclosure forces them to “speak” against their will. Our joint brief argues that these factual disclosures do not violate the First Amendment.

On November 14, 2014, we filed an amicus brief before the federal district court in Vermont in defense of Vermont’s recently-passed law requiring the labeling of food produced with genetic engineering. Major agribusinesses and industrial food manufacturers and processors, represented by the Grocery Manufacturers Association, the Snack Food Association, the International Dairy Foods Association, and the National Association of Manufacturers, have challenged the law under the First Amendment, claiming that it forces them to “speak” against their will. Our brief sets forth fundamental First Amendment principles, and argues that food labeling requirements do not merit the full protection of the First Amendment. The First Amendment was designed to protect democratic participation in self-government and promote individual autonomy of expression, not to exempt commercial vendors from labeling requirements. In fact, Vermont’s law promotes First Amendment values by giving Vermonters accurate and useful information that enables them to exercise their autonomy by making informed purchasing decisions. The state prevailed in district court, and in 2015, we filed an amicus brief in support of the state in the Court of Appeals for the Second Circuit.

Defending the Affordable Care Act against a corporate religion challenge

The Supreme Court ruled on whether corporations have religious rights under the U.S. Constitution. In Conestoga, a kitchen cabinet manufacturer is claiming that the contraceptive care requirement of the new federal Affordable Care Act violates its First Amendment right to the free exercise of religion. In response, we filed a powerful amicus brief before the Court in which we challenge the claim that corporations practice religion and have free exercise rights like people under the Constitution. The Court declined to reach the constitutional issue, deciding in the related Hobby Lobby case that a federal statute allows corporations to raise these religious challenges. Read our statement on U.S. Supreme Court’s ruling on Conestoga and Hobby Lobby.

Free Speech For People drafted a Massachusetts state bill, which was favorably reported by the legislature’s Joint Committee on the Judiciary, to prevent business corporations from claiming religious exemptions from anti-discrimination law. Massachusetts law prohibits many forms of discrimination, in employment, housing, credit, and service at public accommodations, on grounds such as race, color, religious creed, national origin, sex, gender identity, sexual orientation, genetic information, disability, ancestry, or veteran status. However, these important civil rights protections are in danger from a new legal strategy: corporate use of religious freedom claims to challenge anti-discrimination law.

Free Speech For People drafted model legislation in support of a Model Corporate Charter Revocation Act to hold corporate criminals accountable. Corporations are created by state law when the state government issues a corporate charter, which provides special benefits not available to citizens. In general, grant of these privileges through a corporate charter serves the public interest because corporations promote economic growth. But in virtually every state, corporate charters are conditioned on good behavior. Some corporations abuse their privileges by repeated violations of the law. For this reason, state laws have long authorized state officials to revoke the charters of corporations that exceed or abuse their legal authority.

Our Model Corporate Charter Act does not change the procedures of state officials to revoke a corporate charter — only who can bring action in the first place. This model act would grant citizens (and shareholders) the same authority as the state attorney general to bring forward legal action to revoke a corporate charter granted by the state if the corporation has repeatedly violated the law. Learn more about our Model Corporate Charter Revocation Act.

We are calling on the New York Attorney General to investigate whether to begin proceedings to revoke the corporate charter of the Trump Organization in New York State, due to its collusion with the former President Trump to violate the Domestic and Foreign Emoluments Clauses of the U.S. Constitution while in office, and its history of alleged illegal, fraudulent, and abusive conduct. We the people have the power to hold The Trump Organization, Inc. accountable for its obligations under New York state law.

An independent report investigating the 2010 coal mine explosion in West Virginia blamed Massey Energy for the deaths of twenty-nine miners  when the Big Branch facility exploded. Massey’s parent corporation agreed to criminal and civil penalties, but there are greater consequences beyond money and a slap on the wrist for such lethal recklessness. Revoking Massey Energy’s corporate charter in Delaware is a way to hold the corporation accountable.

In 2011, Free Speech For People, Appalachian Voices, and Rainforest Action Network delivered a petition with 35,000 signatures calling for Massey’s corporate charter to be revoked.

In June 2010, Free Speech For People launched a campaign to revoke BP’s corporate charters in Delaware, citing the April 20, 2010 explosion of BP’s Deepwater Horizon oil rig in the Gulf of Mexico leading to the nation’s worst oil spill, as part of the company’s repeated violations of law.  In support of the campaign, we issued a letter to Delaware’s Attorney General Beau Biden calling on him to initiate charter revocation proceedings in state court.