Join our movements and show your support for Challenging Corruption, Challenging Corporate Abuse of Power, Election Protection, Fighting Big Money in Politics, and Restoring Our Democracy.

Make your voice heard by signing our petitions below.

former President Donald Trump incited hundreds of violent insurrectionists to storm the Capitol in an effort to overturn the results of the 2020 election, and other elected officials aided or gave comfort to the insurrectionists. As a result, five people died and more than 140 officers were injured in a seditious attack that shook our democracy to its core. Now, Trump has declared his candidacy for president again in 2024.

However, Trump’s incitement of the January 6th insurrection makes him ineligible for any future run for office. Initially enacted in the wake of the Civil War, Section 3 of the 14th Amendment disqualifies from public office any individual who has taken an oath to uphold the U.S. Constitution and then engages in insurrection or rebellion against the United States, or gives aid or comfort to those who have. By inciting a violent attack on Congress in an effort to prevent the certification of his own electoral defeat, Donald Trump engaged in insurrection and violated his oath of office.

Free Speech For People and Mi Familia Vota are now urging Secretaries of State and chief election officials across the country to follow the mandate of Section 3 of the Fourteenth Amendment and bar insurrectionists from any future ballot.

Ginni Thomas, wife of Supreme Court Justice Clarence Thomas, sent numerous text messages to former Chief of Staff Mark Meadows in an attempt to disregard the results of the November 2020 presidential election. Justice Thomas also refused to recuse himself in cases that Trump and his allies brought to the Supreme Court which falsely argued, as Ginni Thomas has argued, that there was massive voter fraud in the election and that the Supreme Court should overturn the election results. In the Supreme Court case addressing the right of the House Select Committee to access Trump White House records to conduct its investigation of the insurrection on January 6, 2021, Justice Thomas was the lone dissenter, arguing that the committee should be blocked from accessing those records.

All of this has created a crisis of legitimacy for the US Supreme Court. If Justice Thomas used his position on the US Supreme Court to protect and advance his own personal interests, that would constitute an abuse of power and an impeachable offense. In the face of this crisis, the House Judiciary Committee must now do its duty and start an impeachment inquiry of Justice Thomas.

In a March 2021 letter to Attorney General Merrick Garland, Senator Sheldon Whitehouse argues that the FBI’s 2018 investigation into sexual assault allegations against then-Supreme Court nominee Brett Kavanaugh was “politically-constrained and probably fake.” According to the letter, the FBI failed to conduct a thorough review of the evidence against Kavanaugh, including ignoring a tip line for allegations and evidence and refusing to hear witness testimony.

Then, in July 2021, the FBI revealed it had received over 4500 tips regarding Justice Kavanaugh on a phone line during its background investigation. They passed the “relevant” tips off to President Trump’s White House Counsel’s Office, which refused to allow Senators to properly review them before Kavanaugh’s confirmation hearing.

Free Speech For People has repeatedly called for Kavanaugh’s impeachment on the basis of perjury, as well as on sexual assault allegations and an overt display of political bias during his confirmation hearing. The case for impeachment has only grown as he continues to bring the judiciary into disrepute.

GOVERNOR HOCHUL MUST TRANSFER THE CRIMINAL INVESTIGATION OF THE TRUMP ORGANIZATION

For the past three years, the Manhattan District Attorney’s Office has gathered incriminating evidence of numerous financial crimes committed by the Trump Organization, including tax and bank-related fraud.

That’s why the public was shocked and outraged when Manhattan District Attorney Alvin Bragg, who came into office in January of this year and took over the three-year investigation into Trump’s financial crimes, suspended the inquiry indefinitely. It’s clear that Bragg is unwilling to hold Trump and his allies accountable for defrauding the U.S. government and will continue to block prosecutors in his office from doing so despite the clear evidence that “he committed crimes.”

Governor Hochul must immediately transfer the criminal investigation of the Trump Organization to the Office of the New York Attorney General or to another District Attorney’s Office in the state.

A handful of global corporations have taken control of the internet, the dominant medium of all modern communication and commerce, and have used that control to create and sell databases of personal information of all Americans and to promote unprecedented amplification of dangerous disinformation and violence. This has created a grave threat to our democracy and our people. In the face of this threat, our elected officials have failed to take any meaningful action.

Free Speech For People has launched a campaign to demand action and has crafted model federal legislation, the Big Tech Accountability Act, to hold social media companies accountable; to protect internet users, voters, and the broader community from the dangers of rampant amplification of disinformation and violence; and to protect online personal privacy and autonomy.

The Big Tech Accountability Act will:

STOP THE ATTACK ON VOTING RIGHTS 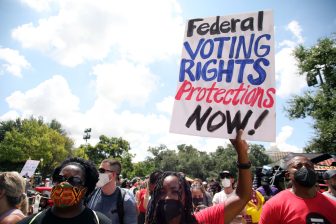 Our democracy relies on the promise of every American’s right to vote freely and fairly. Yet since the 2020 election, legislators have made hundreds of attempts to suppress voting rights, falsely arguing that widespread voter fraud took place in 2020 and denied former President Trump a second term in office. These efforts have led to 19 states passing 34 laws severely restricting voting rights in 2021.

These attacks on our democracy violate the First, Fourteenth, and Fifteenth Amendments to the Constitution, as well as the Voting Rights Act of 1965. Congress must act now by passing the Freedom to Vote: John R. Lewis Act to protect voting rights across the country and make null and void these harmful voter suppression laws at the state level. Congress must take action to protect voting rights nationwide. 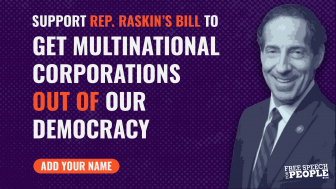 ownership flowing into our elections, circumventing direct bans on foreign influence enshrined in federal law. Citizens United created a massive loophole for foreign interests to acquire stakes in U.S. corporations and then use that leverage to influence or control the corporation’s political activity, including campaign contributions, contributions to super PACs, and independent expenditures. Across the country, companies like Amazon and Airbnb with partial foreign ownership have used their money to influence the outcome of elections and to advance political agendas in their favor.

But we can put a stop to it. Maryland Rep. Jamie Raskin has introduced a bill that would bar corporations with partial foreign ownership from contributing to candidates, parties, or committees (including super PACs) or from engaging in their own direct election spending. Free Speech For People was instrumental in drafting this model legislation and passing it in Seattle last year, and we continue to advocate for it on all levels of government.

Now more than ever, we must restore faith and confidence in our democracy. By banning multinational corporations spending unlimited sums of money to influence our elections, we are upholding the letter of the law and getting us one step closer to a democracy that is truly by and for the people. It’s time to end foreign-influenced corporate spending in U.S. elections.

SAVE DEMOCRACY. ELIMINATE THE FILIBUSTER.

The filibuster, a “Jim Crow relic” that allows a minority of senators to hold votes hostage, is wreaking havoc on our democracy. It has already been used this year to block the For the People Act and legislation to lift the debt ceiling, and it nearly killed the $1.9 trillion COVID-19 relief package passed earlier this year.

Now, as the Senate seeks to pass the Freedom to Vote Act, Senate Republicans have invoked the filibuster again, thwarting one of the largest democracy reform measures in a generation.

The path forward is clear: The filibuster must be eliminated as a weapon that a handful of senators can wield to veto popular democracy-protecting bills. To reclaim our democracy, we must eliminate the filibuster.

The Supreme Court is facing a crisis of confidence. The Federalist Society and other corporate-backed organizations have spent decades packing the courts, creating a right-wing majority that frequently votes against the will of the people and undermines basic constitutional principles.

On May 2, 2022, Politico reported that a leaked draft of a majority opinion written by Justice Samuel Alito made clear that the Supreme Court plans to overturn Roe v. Wade as early as June. With that decision, a woman’s right to choose will be jeopardized nationwide. President Biden and Congress cannot sit idly by while fundamental rights are eviscerated by this Supreme Court.

Members of Congress have already introduced legislation to address this crisis. The Judiciary Act would add four seats to the Supreme Court, reflecting the growth of the judiciary over the past 150 years. The time to act is now. To restore legitimacy and balance and secure the rights of the American people, Congress must pass the Judiciary Act and expand the Supreme Court. 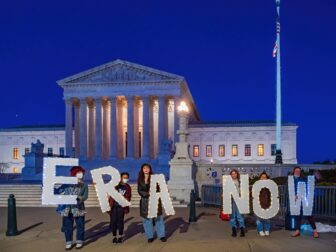 Free Speech For People, Generation Ratify, and six other organizations have issued a letter to Attorney General Merrick Garland, urging him to instruct the Department of Justice’s Office of Legal Counsel (OLC) to rescind its January 6, 2020 advisory opinion regarding the ratification of the Equal Rights Amendment (ERA). The Archivist of the United States is responsible for publishing and certifying the Equal Rights Amendment as the 28th Amendment to the U.S. Constitution, but has declined to do so in deference to the OLC opinion. Rescinding this erroneous opinion will clear the way for the Archivist to publish and certify the ERA.

Under the direction of former Attorney General Bill Barr, the OLC argued that the ERA has not and cannot be properly ratified because only 35 states ratified the ERA prior to the expiration of an extra-constitutional seven-year ratification deadline imposed in 1972. This deadline, however, was not included in the text of the amendment passed by Congress and ratified by the states and, as such, lacks any constitutional authority. Nevada, Illinois, and Virginia have since ratified the amendment, satisfying the constitutional requirement that a proposed amendment be ratified by three-fourths of the states.

The United States currently lacks explicit federal constitutional protection against discrimination on the basis of sex. The ERA would correct this, by ensuring that “[e]quality of rights under the law shall not be denied or abridged by the United States or by any State on account of sex.”

Attorney General Merrick Garland must rescind the 2020 OLC opinion and clear the way for the National Archivist to certify the ERA as the 28th Amendment to the Constitution.