The Growing Threat to Our Democracy 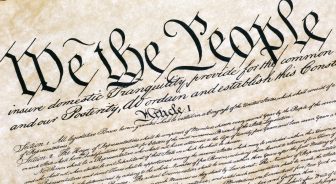 The Constitution provides for a republican democracy — government of, by, and for the people.  We have fought a civil war and enacted constitutional amendments to ensure that that means all the people, not just people of a certain racial background and gender and not just the wealthy few.

But today, radical Supreme Court decisions and a dangerously antiquated electoral system are threatening this fundamental principle that defines who we are as a nation.

In its Citizens United v. FEC decision in 2010, the Supreme Court swept away a century of precedent that barred corporate money in our elections and opened the floodgates to corporations spending limitless sums of money to take over our elections. And lower federal courts have gone even further, prohibiting Congress from limiting contributions to political action committees, and enabling billionaires to buy election results by contributing millions of dollars to so-called Super PACs.

Citizens United isn’t the only problem we have to solve.  In an earlier case (in 1976), Buckley v. Valeo, the Court said, wrongly, that the First Amendment prohibits Congress from placing limits on campaign spending.  Ever since Buckley, Americans have been barred from limiting spending by big money interests in our political process.  This has turned our elections into auctions for the highest bidders.

Citizens United also endorsed the dangerous fiction that corporations have constitutional rights like living, breathing people.  In many cases, this gives corporations a veto over our democratically enacted laws, because a constitutional right trumps a regular law when the two conflict.  This threatens our laws protecting the safety of our food, the air we breathe, our health care, our civil rights, our right to a fair and just economy, and the fundamental underpinnings of our democracy—essentially, any law that could get in the way of corporate profits.

In April 2014, in McCutcheon v. FEC, the Court struck down aggregate limits on all gifts given directly to candidates’ campaigns in federal elections. The ruling has further fueled the explosion of big money dominance over our elections.

And, in yet another misguided decision, Arizona Free Enterprise Club (in 2011), the Court struck down Arizona’s Clean Election Law based on the remarkably undemocratic proposition that it is improper for the people to seek to level the playing field by publicly funding elections and limiting private election spending.

At the same time, the Court has issued rulings which trample on our voting rights. While several constitutional amendments prohibit specific forms of denial of the vote (for example, based on age, or nonpayment of a poll tax), the Constitution contains no affirmative right to vote. That has led courts to uphold many restrictions on voting, such as the photo ID requirement upheld in Crawford v. Marion County Election Board, or state bans on voting by people who have completed their sentences for certain convictions.

Perhaps most strikingly, due to our antiquated Electoral College system, in our most important elections — for president and vice president — we fail to honor equal protection of the laws and the one person-one vote principle that is the hallmark of true democracies.  Instead, some votes count more than others, based solely on where you live, and the candidate who gets the most votes nationwide can end up being declared the loser, as happened in 2000 and 2016.

For all these reasons, we’re standing up together to overrule the Supreme Court and to reclaim our democracy.

Article V of the U.S. Constitution gives us the power to amend the Constitution — even to overrule Supreme Court decisions — and we the people have used this power 27 times before.  Many of our past amendments have overturned egregious Supreme Court rulings to enable people to participate in our democracy on equal terms, including the 13th Amendment ending slavery, the 19th Amendment guaranteeing women the right to vote, the 24th Amendment banning poll taxes,  and the 26th Amendment, which established voting rights for all citizens beginning at age 18.

Now the time has come for us to do it again.

For more on why we need a constitutional amendment to overturn Citizens United and end big money in our politics and on how to achieve one, see Fixing the Supreme Court’s Mistake: The Case for the Twenty-Eighth Amendment.

How We Restore Our Democracy

Get big money out of our politics and end the fiction that corporations have constitutional rights, as if they were people.

Make clear that voting is a fundamental right.

Abolish the Electoral College and replace it with a national popular vote for President and Vice President.

Free Speech For People has developed the Free and Fair Elections Amendment to end the big money dominance of our elections. This proposed amendment sets limits on federal campaign contributions and spending; prohibits corporate spending in the political process (as existed prior to the Supreme Court’s ruling in Citizens United v. FEC); requires Congress to develop a system of public campaign financing for all federal candidates who qualify for the ballot; and allows the States to set reasonable limits on campaign contributions and spending in state and local elections. The amendment overturns Citizens United and other Supreme Court rulings which have so threatened our democracy.

We also endorse the Democracy For All Amendment (S.J. Res. 51; H.J. Res. 2), which allows Congress and the States to set limits on campaign contributions and spending, and we endorse the We the People Amendment (H.J. Res. 48) which states, in part, that Congress shall regulate campaign contributions and spending. We believe the Free and Fair Elections Amendment is preferable because it will establish, upon enactment, key contribution and spending limits and it will ensure a strong public financing system for all federal candidates who qualify for the ballot, thereby leveling the playing field for candidates regardless of their access to wealth.

Free Speech For People supports the Right to Vote Amendment sponsored in the 115th Congress by Representative Mark Pocan and others. It provides that “Every citizen of the United States, who is of legal voting age, shall have the fundamental right to vote in any public election held in the jurisdiction in which the citizen resides.” This will establish an individual right to vote in our Constitution and will prohibit all forms of discriminatory exclusion from that right.

Read the Right to Vote Amendment

Free Speech For People supports the amendment (H.J. Res. 14) to abolish the Electoral College and replace it with a national popular vote for President and Vice President, ensuring that all citizens have an equal say in choosing the most important positions in our government.

Free Speech For People supports the Equal Rights Amendment, guaranteeing equal rights to all people regardless of sex. The ERA, which advances bedrock equality principles, is tied directly to our work to fulfill the promise of political equality for all. Following decades of advocacy and determination, the ERA is moving forward. On January 15, 2020, Virginia became the 38th state to ratify the amendment, finally meeting the required number of states for ratification.

But there is one more hurdle in this decades-long fight for the ERA. Under the direction of former Attorney General Bill Barr, the Department of Justice’s Office of Legal Counsel issued an advisory opinion that the ERA has not and cannot be properly ratified because only 35 states ratified the ERA prior to the expiration of an extra-constitutional seven-year ratification deadline imposed in 1972. This deadline, however, was not included in the text of the amendment passed by Congress and ratified by the states and, as such, lacks any constitutional authority. Nevada, Illinois, and Virginia have since ratified the amendment, satisfying the constitutional requirement that a proposed amendment be ratified by three-fourths of the states. In a letter issued on April 7, 2021 to Attorney General Merrick Garland, Free Speech For People and Generation Ratify led a coalition of organizations urging the Department of Justice to reverse the Trump-era opinion and instruct the National Archivist to publish the Equal Rights Amendment in the US Constitution.

Statements in Support of a Constitutional Amendment to Overturn Citizens United

Testimony Presented on a Constitutional Amendment

Join the movement to reclaim our democracy!

Sign up now to receive updates from Free Speech For People on the latest news and actions you can take to get involved in the movement to reclaim our democracy.