In November 2020, a record number of people cast a ballot in the presidential election. While this civic participation represents a great victory for our democracy, select legislators have sought to perpetuate the ‘Big Lie’ claiming voter fraud and a stolen election. As a result, legislation designed to suppress the votes of underrepresented communities has passed in nineteen states. Free Speech For People has launched legal actions to challenge efforts to suppress the vote and other emerging threats to our fundamental right to vote.

Free Speech For People represents Mi Familia Vota and individual voters in this challenge of a new voter suppression law enacted by the Texas Legislature. The lawsuit challenges Texas Senate Bill No. 1 (SB 1), a law designed to suppress votes from Texans of color and other marginalized communities through measures that include prohibiting drive-through voting, limiting voting hours, making it unlawful for counties to automatically mail eligible voters mail-in ballot applications; implementing stricter rules for voting by mail; allowing election officials to reject allegedly defective ballots without notice to the voter prior to the election; implementing monthly purges of voter rolls; limiting physical and language assistance at the polls; and enabling partisan poll watchers, which creates increased risk of voter intimidation. Free Speech For People is pleased to partner with the law firms of Stoel Rives and Lyons & Lyons in this litigation. 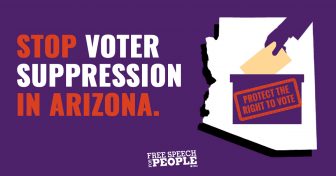 Free Speech For People represents Mi Familia Vota, Arizona Coalition for Change, Living United for Change in Arizona (LUCHA), and Chispa Arizona in this challenge of two new voter suppression laws passed by the Arizona legislature, which will disproportionately disenfranchise Black, Native American, and Latino voters. With our litigation, we will seek to overturn SB 1485, a law that will result in voters being removed from the Permanent Early Voting List by 2024 if they fail to vote in two consecutive election cycles, and SB 1003, a law that gives voters only until 7pm on election day to cure a mail-in ballot that is missing a signature, disenfranchising voters with a lack of access to transportation, child-care, leave from work, or other barriers. Free Speech For People is pleased to partner with the law firms of Mayer Brown LLP and Quarles & Brady LLP in this litigation.

After Campaign Legal Center filed an initial lawsuit, Arizona passed another voter suppression bill, H.B. 2243, which requires local election officials to remove voters from registration rolls using outdated and inaccurate data about voters’ residency and citizenship status. This amended complaint adds a challenge to H.B. 2243 and claims that the laws violate the National Voter Registration Act and Section 2 of the Voting Rights Act of 1965. Free Speech For People, in partnership with the law firm of Mayer Brown LLP, is pleased to join the San Carlos Apache Tribe Department of Justice, Campaign Legal Center, and Barton Mendez Soto PLLC on the legal team for this litigation.