First of its kind in the nation, the ordinance seeks to protect the integrity of elections in St. Petersburg

ST. PETERSBURG, FL – The St. Petersburg City Council voted today to move forward an ordinance that will abolish super PACs and prohibit spending by foreign-influenced corporations in city elections. The ordinance is the first of its kind in the nation.

“We are protecting St. Petersburg with this proactive ordinance,” says Darden Rice, Chair of St Petersburg City Council. “Curbing Super PAC money and foreign corporate money in our local elections is an act of leadership to safeguard our democratic process. Better to be responsible and fend off big corporate money at the pass now than to say later, “I told you so.”

The ordinance will require corporations that spend money in St. Petersburg elections to certify they are not foreign-influenced, or owned in whole or a significant part by foreign entities. The ordinance will also establish limits on contributions to political action committees, thereby abolishing super PACs in local elections.

“Campaign spending reform will not come from Washington or Tallahassee.  If we are going to stop the tidal wave super PAC money, it will have to start with Cities brave enough to challenge it,” says Karl Nurse, St Petersburg Councilmember.

In March 2010, the U.S. Court of Appeals for the D.C. Circuit in SpeechNow.org v. FEC opened the door to super PACs by holding that the federal law limiting contributions to political committees to $5,000 per person each year did not apply to a political committee that promised to make only “independent expenditures.”  While some federal appellate circuits have followed the SpeechNow ruling, the U.S. Court of Appeals for the Eleventh Circuit, which has jurisdiction over federal cases in Alabama, Florida, and Georgia, has yet to rule on this question, nor has the U.S. Supreme Court or the Florida Supreme Court.

Super PACs have nearly doubled in number since 2012, and, according to the Miami Herald, donations to “groups [that] enjoy no limits on individual donations,” such as super PACs, “have skyrocketed” in recent years across Florida. Many campaign finance scholars argue that super PACs have now become vehicles for wealthy donors to evade campaign contribution limits designed to prevent corruption and the appearance of corruption. 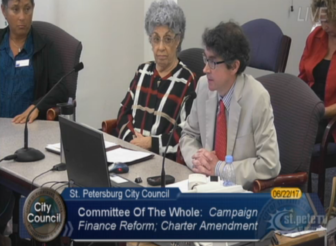 John Bonifaz speaks at the St. Petersburg Committee of the Whole meeting on 6/22/2017

Alongside the rise of super PACs, the nation has also witnessed foreign corporate money flowing into our elections as a result of the U.S. Supreme Court’s 2010 ruling in Citizens United v. FEC, which swept away longstanding precedent barring corporate money in our political process.  For example, in May 2016, Uber teamed up with fellow ride-hailing service Lyft to drench Austin, Texas, in $9 million worth of election spending in the hope of overturning a city law requiring drivers to submit to fingerprint-based criminal background checks. Then, just weeks later, Uber disclosed an unprecedented $3.5 billion investment from the Saudi Arabian government, meaning that the Kingdom owns more than five percent of the company, along with a seat on its board of directors.  And, in 2014, Chevron spent over $3 million backing city council and mayoral candidates in Richmond, Calif., a city half the size of St. Petersburg. Chevron — a multinational corporation whose stock ownership changes by the minute — was at the time facing a multimillion-dollar lawsuit from the city over a refinery fire that caused more than 15,000 people to seek medical treatment.

Free Speech For People, a national non-profit public interest organization founded on the day of the Supreme Court’s Citizens United ruling, helped to draft the ordinance.

“The City of St. Petersburg is leading the way in the fight to reclaim our democracy,” says John Bonifaz, the Co-Founder and President of Free Speech For People. “Today’s vote by the St. Petersburg City Council to move forward a model law marks a huge victory for the people all across the city who have stood up to demand an end to super PACs and foreign-influenced corporations threatening the integrity of their local elections. If enacted, this ordinance will be a model for communities throughout the nation on how to fight big money in politics and defend the promise of American self-government.  Free Speech For People congratulates the St. Petersburg City Council on this historic vote, and we thank the many grassroots activists and citizens of St. Petersburg who have worked tirelessly to achieve this victory.”