On January 10, 2022, a group of North Carolina voters filed a legal challenge before the North Carolina State Board of Elections to U.S. Representative Madison Cawthorn’s 2022 candidacy (In re Challenge to the constitutional qualifications of Rep. Madison Cawthorn). The challenge alleges that Cawthorn is constitutionally disqualified from public office under the Fourteenth Amendment to the U.S. Constitution based on reasonable suspicion that he helped facilitate the January 6, 2021 insurrection. The voters are represented by Free Speech For People, which is serving as co-lead counsel in the matter; Womble Bond Dickinson, a North Carolina law firm serving as co-lead counsel; Wallace & Nordan, a North Carolina law firm specializing in election law; and Robert F. Orr, a former Republican Justice of the North Carolina Supreme Court.  James G. Exum, Jr., a former Chief Justice of the North Carolina Supreme Court, serves as Of Counsel in the matter.

In response, Rep. Madison Cawthorn, filed a federal lawsuit against the NC State Board of Elections seeking to block that proceeding (Cawthorn v. Circosta).

Our clients moved to intervene in the federal case. The district court denied our motion to intervene (twice) and granted Cawthorn a preliminary injunction to block the State Board proceedings on the supposed basis that the Amnesty Act of 1872 applies to January 6 insurrectionists.

After Cawthorn lost his primary and the State Board certified his loss, all parties agreed to dismiss the case since the challenge to his candidacy was now moot.

Section Three of the Fourteenth Amendment, known as the Disqualification Clause, provides: “No Person shall be a Senator or Representative in Congress. . . who, having previously taken an oath, as a member of Congress . . . to support the Constitution of the United States, shall have engaged in insurrection or rebellion against the same, or given aid or comfort to the enemies thereof.” The purpose of the Disqualification Clause, passed in the wake of the Civil War, was to protect the country. Free Speech For People and Our Revolution are co-leading a national campaign to ensure that election officials across the country follow the mandate of Section 3 of the Fourteenth Amendment.  More information about that campaign is available at www.14point3.org

The coordinated and violent attack on the United States Capitol in an effort to prevent Congress from certifying the presidential vote on January 6, 2021 was an insurrection against the United States. The publicly available evidence includes Representative Cawthorn’s own speeches, 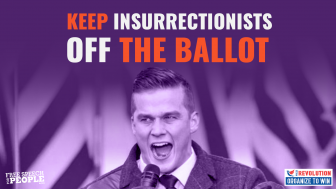 tweets, and other public statements that he or his office coordinated with the January 6 organizers. This establishes reasonable suspicion that Representative Cawthorn aided the insurrection, thereby disqualifying him from federal office. In the weeks leading up to January 6, Cawthorn publicly urged his followers to threaten and intimidate Members of Congress into blocking certification of 2020 election results. As the date approached, Cawthorn or his staff were in close contact with rally organizers. Since the insurrection on January 6, his speeches suggest that he continues to endorse political violence as a tool for intimidation.

On January 10. 2022, a group of North Carolina voters filed a legal challenge to U.S. Representative Madison Cawthorn’s 2022 candidacy (In re Challenge to the constitutional qualifications of Rep. Madison Cawthorn). Under North Carolina’s candidacy challenge statute, any registered voter in his district may challenge his candidacy based on “reasonable suspicion or belief” that he “does not meet the constitutional or statutory qualifications for the office.” Now that this challenge has been filed, the burden of proof shifts to the candidate, who “must show by a preponderance of the evidence . . . that he or she is qualified to be a candidate for the office.”

In response, Rep. Madison Cawthorn, filed a lawsuit against the North Carolina State Board of Elections in an attempt to stop the process that normally unfolds after such a legal challenge (Cawthorn v. Circosta).

In re Challenge to the constitutional qualifications of Rep. Madison Cawthorn