The Campaign That Challenged Corruption 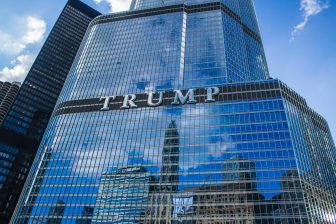 In July 2017, Free Speech For People launched a campaign calling for the divestment of public pension funds from Trump owned businesses which were funneling millions of dollars to the Trump Organization in violation of the Domestic Emoluments Clause of the Constitution. Following the launch of the campaign, thousands of Californians and New Yorkers joined in calling for the fund manager, CIM Group LP, to end the investments in Trump Soho.

On November 22, 2017, CIM Group LP announced the fund would buy out the Trump Organization and terminate its agreement with Trump business years before the contract expires, ending the illegal payments from state pension funds to the President and signifying an important victory in the fight to challenge corruption at the highest levels of government.

The troubling investment first came to light in April 2017, when Reuters reported that CalPERS, New York State Common Retirement Fund, and several other state and local pension funds were paying millions to a private equity fund manager for an underperforming investment in one of Trump’s shadiest real estate deals, the Trump SoHo.

The New York luxury hotel and condo property has been at the center of fraud and money laundering allegations since it was first developed, and when its lackluster financial performance led to bankruptcy, CIM Fund III, a private equity fund where CalPERS, New York State, and nine other state and local pension funds had sunk hundreds of millions of their members’ funds, acquired it through foreclosure.

Under the terms of the foreclosure, the fund manager paid millions to the Trump organization to “market and manage” the Trump SoHo. The investment in Trump SoHo became even more problematic once Trump became President, because the arrangement meant that the fees state pension funds were paying to the fund manager were making their way directly into President Trump’s pockets. The U.S. Constitution prohibits states like California or its pension fund, from making payments to the President under a provision known as the Domestic Emoluments Clause. 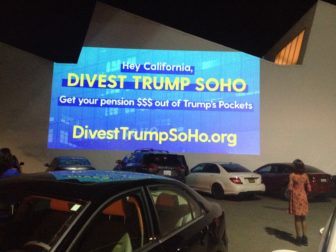 The Power of People and Campaign Victory

Over the next few months following the announcement of the campaign, thousands of Californians and New Yorkers from all walks of life joined in asking CalPERS and the New York State Comptroller to exert pressure on the fund manager, CIM Group LP, to liquidate the Trump SoHo, terminate the arrangement with the Trump Organization to market and manage the Trump SoHo, or divest from the fund altogether. Dedicated individuals made trips to Sacramento to call upon CalPERS’ Board of Directors to protect beneficiaries from this corruption, and at the end of October, Rep. Ted Lieu and 11 of his fellow members of the California congressional delegation urged CalPERS to take immediate action.

In November 2017, news broke that CIM Group planned to buy out the Trump Organization and terminate its agreement with Trump International Hotels Management to market and manage Trump SoHo years before the contract expired.

This was a tremendous outcome, ending illegal payments from state pension funds to the President and demonstrating the power of people to end corruption by shining a light on it.

Read More in Our Blog

A tumultuous time for Trump Soho:

Get Your Pension $$$ Out of Trump’s Pockets

Ethics experts from past Republican and Democratic presidential administrations as well as the Office of Government Ethics, called upon President Donald J. Trump to divest his businesses to avoid violating the Foreign and Domestic Emoluments Clauses of the United States Constitution.

Curbing Corruption One Step at a Time: