State Senator Mark Montigny is the lead sponsor of Senate Bill SD.2219 , and State Representative Erika Uyterhoeven is the lead sponsor of House bill HD.1463, both of which will require corporations that spend money in Massachusetts elections to certify they are not foreign-influenced, or owned in whole or a significant part by foreign investors.  Senator Comerford and Representative Uyterhoeven have also introduced companion bills, S.455 and H.840, and Representative Mike Day has introduced H.722, all of which will establish limits on contributions to political action committees, thereby abolishing super PACs in state elections.

The nation has witnessed money from corporations with significant foreign ownership flowing into our elections as a result of the U.S. Supreme Court’s 2010 ruling in Citizens United v. FEC, which swept away longstanding precedent barring corporate money in our political process.  For example, in May 2016, Uber teamed up with fellow ride-hailing service Lyft to drench Austin, Texas, in $9 million worth of election spending in the hope of overturning a city law requiring drivers to submit to fingerprint-based criminal background checks. Then, just weeks later, Uber disclosed an unprecedented $3.5 billion investment from the Saudi Arabian government, meaning that the Saudi Kingdom owns more than five percent of the company, along with a seat on its board of directors.  In 2019, Amazon spent over 1.5 million dollars to try to influence the outcome of the Seattle City Council elections that year.  That amount was more than the combined total amount of money raised by candidates not supported by Amazon. More than 5% of Amazon is foreign-owned.  In January 2020, the Seattle City Council enacted a ban on political spending by foreign-influenced corporations based on the same model as the Massachusetts bill.

In Congress, Senator Warren and Representative Pramila Jayapal have proposed the Anti-Corruption and Public Integrity Act, which includes a provision to ban foreign-owned and partially foreign-owned corporations from spending on United States elections, including on a State or local ballot initiative or referendum.

Limits on Contributions to Super PACs

Contrary to a common misconception, the Supreme Court’s Citizens United decision does not prevent states from limiting contributions to super PACs. In March 2010, the U.S. Court of Appeals for the D.C. Circuit in SpeechNow.org v. FEC opened the door to super PACs by holding that the federal law limiting contributions to political committees to $5,000 per person each year could not be applied to a political committee that promised to make only “independent expenditures.”  While some federal appellate circuits have followed the SpeechNow ruling, the U.S. Court of Appeals for the First Circuit, which has jurisdiction over federal cases in Maine, Massachusetts, New Hampshire, Puerto Rico, and Rhode Island, has yet to rule on this question, nor has the U.S. Supreme Court or the Massachusetts Supreme Judicial Court.

Read testimony in support from scholars in support of our proposed legislation to limit foreign-influenced corporate spending from Massachusetts elections.

*Appendix to the Statement of Albert W. Alschuler to the Joint Committee on Election Laws on H.2082

For more on the legal theory and background of this legislation, read the letters of support from scholars in support of the St. Petersburg Ordinance to limit foreign-influenced corporate spending and abolish super PACs in local elections:

A new report from the Center for American Progress, written by senior fellow Michael Sozan, highlights the problem of political spending by foreign-influenced corporations. The report—which cites Free Speech For People’s pioneering legislative work in places like Seattle, St. Petersburg, and Massachusetts—proposes banning political spending by partially-foreign-owned corporations, using the same thresholds for foreign ownership as the Seattle and Massachusetts legislation that we helped develop.

Since the Supreme Court’s 2010 Citizens United decision invalidated restrictions on corporate political spending, considerable public and policymaker interest has developed in the potential for U.S. elections to be

influenced by foreign interests through U.S. corporations. On the one hand, existing federal law (the Federal Election Campaign Act) already prohibits political spending in federal, state, or local elections by corporations that are incorporated outside the U.S., or which have their principal place of business abroad. On the other hand, current law still allows substantial avenues for foreign influence over corporate political spending by U.S.-incorporated and -based corporations. 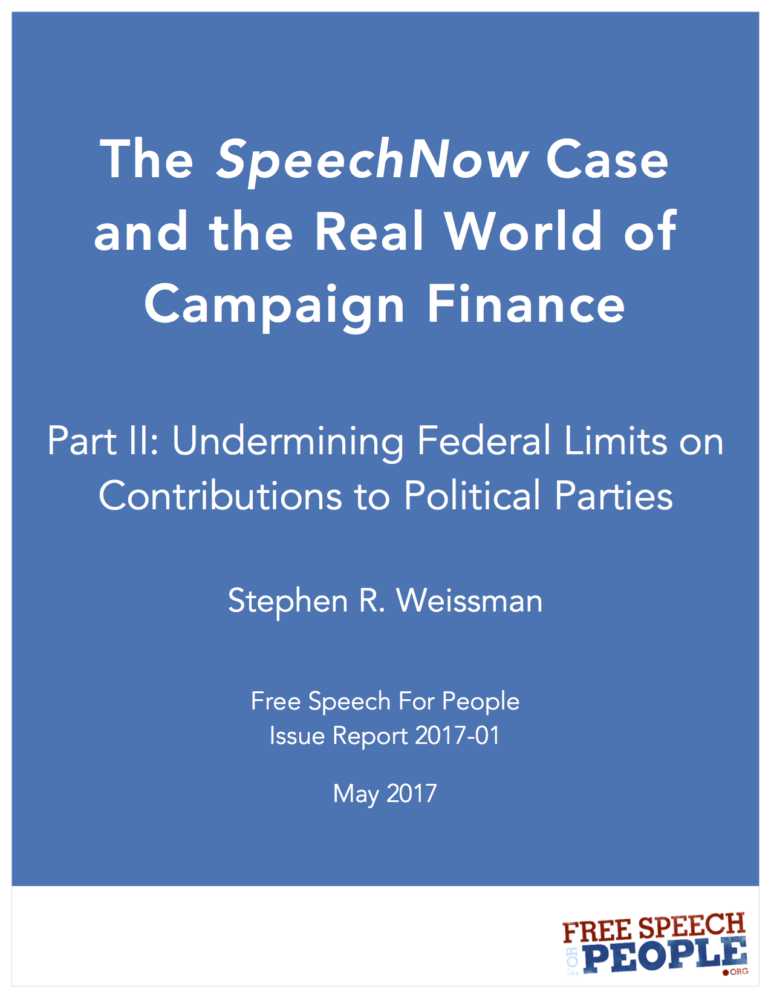 he large donors surveyed in this study made very substantial contributions to their preferred party committees. The size of these contributions, while within legal limits, assured that these donors would be noticed by party fundraisers, many of whom were themselves candidates and elected officials. When these donors simultaneously embellished their financing by massively subsidizing independent Super PACs linked to the same parties in the same elections, they intensified the danger of corruption and its appearance.