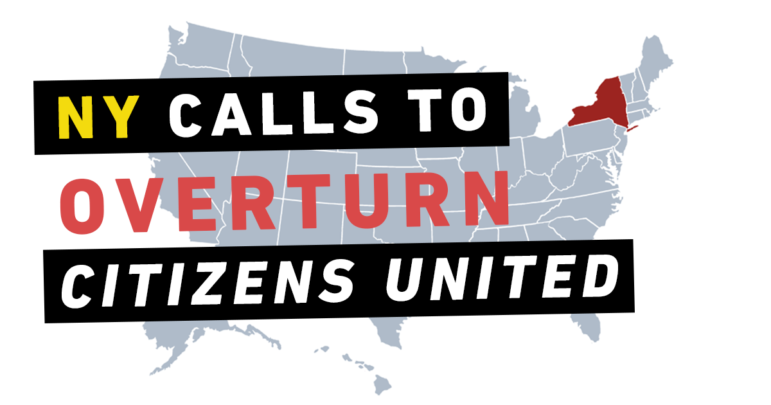 CO-FOUNDER AND PRESIDENT OF FREE SPEECH FOR PEOPLE

New York is now the 17th state in the country to call for a 28th Amendment to the US Constitution to overturn the Supreme Court’s Citizens United v. FEC ruling and to reclaim our democracy.  With a key bipartisan majority, New York legislators have signed a joint letter to Congress urging that it pass this amendment and send it to the states for ratification. This marks a major victory for the growing grassroots movement to defend our Republic. New York now joins 16 other states, more than 650 cities and towns, and more than 130 Republican officials across the country who have called for a 28th Amendment.  Free Speech For People applauds the New York Legislature on this historic action.

The Supreme Court’s Citizens United ruling and related rulings have allowed big money forces to dominate our politics, threatening our democracy and undermining America’s promise of political equality for all. No one has a First Amendment right to drown out other people’s speech. A 28th Amendment is necessary today to ensure that big money interests may not drown out the voices of everyone else in the political process.

We have done this before in our nation’s history.  Twenty-seven times before.  Seven of those times to overturn egregious Supreme Court rulings.  We have amended our Constitution to defend our democracy and to expand our democracy.  We can and we must do it again.

This bipartisan victory here in New York proves once again the power of this call for a 28th Amendment.  The pressing question before the nation today is whether it is ‘we the people’ or ‘we the corporations and big money interests.’ This not a Democratic issue or a Republican issue. This is a deeply American issue. Whatever our political differences may be, we all share the common vision of government of, by, and for the people.

This victory also demonstrates that a sustained people-powered movement can win.  New York citizens from throughout the state have repeatedly called on their legislators to take this action.  They have rallied.  They have marched.  They have traveled to their state capitol to stand up and be heard.  And, they won.  When the history of the 28th Amendment is written, it will include the story of New York citizens demanding their democracy back.

As Nelson Mandela said: “It always seems impossible until it’s done.”  We are on the right side of history.  We will win the 28th Amendment and we will reclaim our democracy.