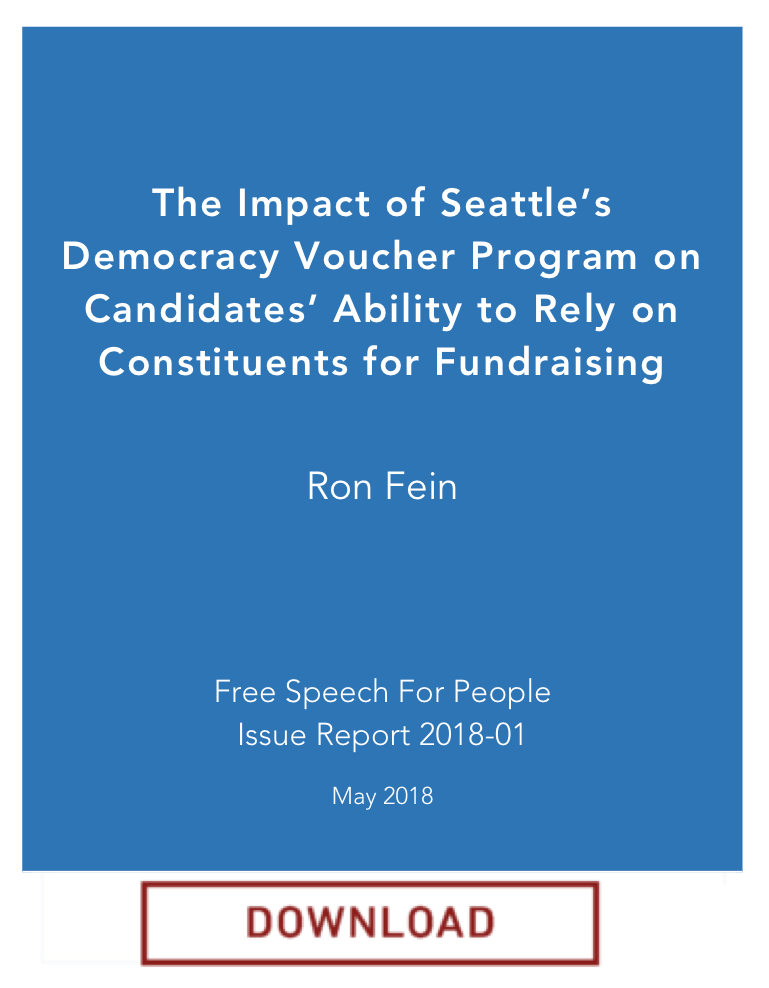 Contaminating the Courts: Fighting Back Against a Corporate Campaign to Attack the Environment

By: Free Speech For People and Greenpeace 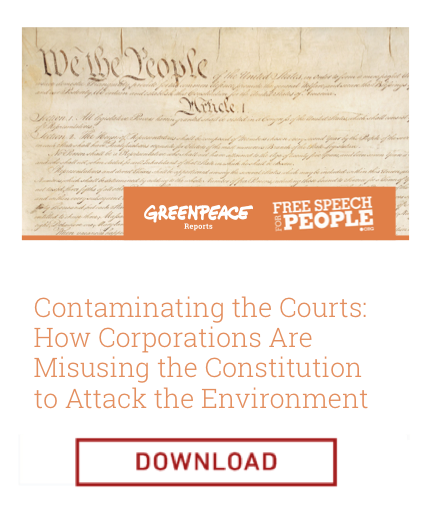 Free Speech For People joined with Greenpeace on the report, Contaminating the Courts: The Corporate Campaign to Misuse the Constitution to Attack the Environment, to challenge corporations claiming constitutional rights to avoid accountability under the law. With this report, Greenpeace and Free Speech For People trace the history of the coordinated corporate strategy to distort constitutional rights into tools to thwart environmental and consumer protections, including recent attempts by Exxon Mobil to claim free speech rights following the uncovering of decades of misleading statements by the company regarding the impact of fossil fuels on climate change. Corporations are trying to use concepts that were intended to protect vulnerable, marginalized individuals and groups in the service of legal entities that wield incredible power and wealth. Free Speech For People and Greenpeace are fighting back against attempts by corporations to misuse the Constitution to undermine important health and environmental protections.

In the U.S. Court of Appeals for the D.C. Circuit’s SpeechNow decision, which created super PACs, the court theorized that contributions to so-called “independent expenditure committees” could not possibly result in corruption. In the real political world, however, as this study shows, top donors 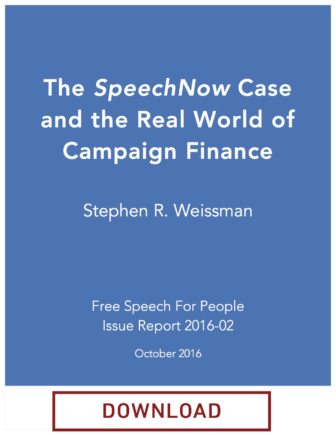 “This research undermines the judicial theory that large contributions to super PACs cannot create even the appearance of corruption. The data show that the vast majority of big super PAC donors also make large direct contributions to the same candidates that they subsidize indirectly via super PACs. Since the donors are financially entwined with their favored candidates, their additional support through super PACs intensifies the danger of corruption.

The SpeechNow Case and the Real World of Campaign Finance: Undermining Federal Limits on Contributions to Political Parties (Part II)

In “Part II: Undermining Federal Limits on Contributions to Political Parties“, the report follows the top 100 individual and 50 organizational donors to independent groups in the 2012 and 2014 elections. It focuses on those who gave to one or more of the six official national party committees and also contributed to unofficial party-linked Super PACs active in the same election(s). 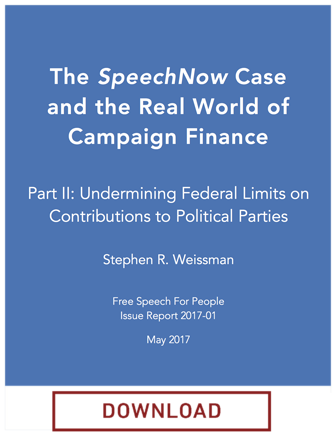 The present study examines the same universe of top outside money donors to the 2012 and 2014 elections. The analysis focuses on donors who contributed to national party committees in a particular cycle while simultaneously donating to independent, party-linked Super PACs in the same elections. It turns out that a considerable proportion of top individual and organizational donors to independent groups – approximately 40 to nearly 50% – followed a two-track policy of making legally limited contributions to party committees while also providing massive funds to party-linked Super PACs for the same elections.

For example, in 2014, the maximum a donor could give to a party committee per year was $32,400; assuming a donor who gave to all three committees of one party, that’s $97,200 to party committees. Under federal law, $97,201 would be illegal—too high a risk of quid pro quo corruption—but that same donor can give millions to party-linked super PACs. In essence, donors can multiply their legal direct party contributions by giving to party-linked super PACs at levels far beyond what Congress has determined is necessary (and the Supreme Court has so far upheld) to protect against corruption. This pattern of giving completely undermines the limits on contributions to parties.

The large donors surveyed in this study made very substantial contributions to their preferred party committees. The size of these contributions, while within legal limits, assured that these donors would be noticed by party fundraisers, many of whom were themselves candidates and elected officials. When these donors simultaneously embellished their financing by massively subsidizing independent Super PACs linked to the same parties in the same elections, they intensified the danger of corruption and its appearance. By ignoring such political realities, the SpeechNow decision has helped undermine federal contribution limits, the primary means of federal regulation of campaign financing.

Since the Supreme Court’s 2010 Citizens United decision invalidated restrictions on corporate political spending, considerable public and policymaker interest has developed in the potential for U.S. elections to be influenced by foreign interests through U.S. corporations. On the one hand, existing federal law (the Federal Election Campaign Act) already prohibits political spending in federal, state, or local elections by corporations that are incorporated outside the U.S., or which have their principal place of business abroad. On the other hand, current law still allows substantial avenues for foreign influence over corporate political spending by U.S.-incorporated and -based corporations. 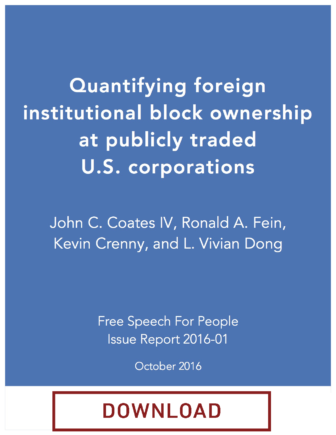 “Six years ago, the Supreme Court’s Citizens United decision opened the door to corporations spending money to influence our elections, and the dissent warned that corporate political spending could become a pathway for foreign influence. The Federal Election Commission, and the local government in St. Petersburg, Florida, have been exploring potential rules to address the risk of foreign investors leveraging their ownership stakes in U.S. corporations to advance their interests through corporate political spending. This study shows that about 1 in 11 companies on the S&P 500 have one or more foreign or foreign-controlled investors that own enough stock to be required to report their ownership stakes to the federal government. 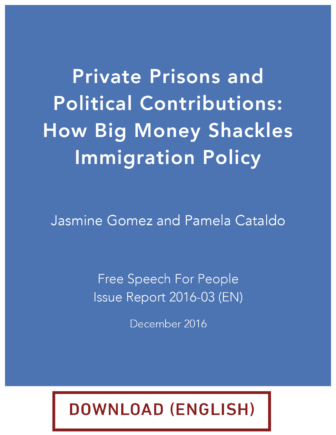 According to a report released December 14, 2016 by Free Speech for People, private prison companies and prison guard unions spent millions of dollars to lobby and elect both Democrats and Republicans into office. This includes funds donated to president-elect Trump, that apparently violated campaign finance laws, and funds given to Democratic Governor Jerry Brown. The report follows the money to see what these candidates support when it comes to issues related to immigration reform. The report discovered that Governor Brown, one of the only Democrats to receive donations from private prison companies and prison guard unions, used his power to veto the “Dignity Not Detention Act,” which had overwhelming support with state legislatures. It also found that if Trump keeps to his words, there will be millions of undocumented people held in immigration detention centers while they wait for court deportation proceedings, driving up private prison stock value. Both decisions are profitable to private prison companies, and neither provides solutions for immigration reform. 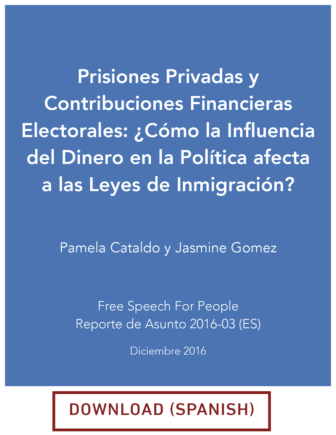 This bilingual report highlights examples of the biggest roadblocks in American democracy — money in politics. The Supreme Court’s decisions in Citizens United v. FEC ruled that money should have “free speech” protections under the Constitution, meaning wealthy people (and now, since Citizens United,corporations and unions) can spend unlimited amounts of money in politics. Studies show that middle and low income voters have virtually no effect on the policies Congress recently enacted. Instead, Congress listens to those with the most money to spend on their elections. This has left us with a nation that is now run by, and largely for, the wealthy few.

“Overturning Citizens United won’t fix our immigration policy, or the detention system, overnight. But when we’re up against the wealth and political might of the private prison industry, we need the voices of the people to rise above the wallets of the wealthy.”