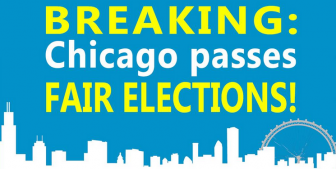 Yesterday, on February 24, Chicagoans went to the polls and 80% of voters (and counting) took a stand against the corrupting influence of big money. Voters in Chicago voted “YES”, in favor of small-donor focused reform that would put the power of politics back in the hands of the people.

We celebrate this victory and commend our allies, such as Common Cause Illinois, who sent a loud and clear message to fundamentally reform the way Chicago elects its leaders. This win demonstrates that we are building momentum, city by city, state by state. Americans across the country and party lines are tired of special interest groups influencing their elections and buying their candidates. We are ready for reform, and this victory in Chicago moves us closer to overturning Citizens United.

Similar movements to get money out by voting are happening in Maine and in California.