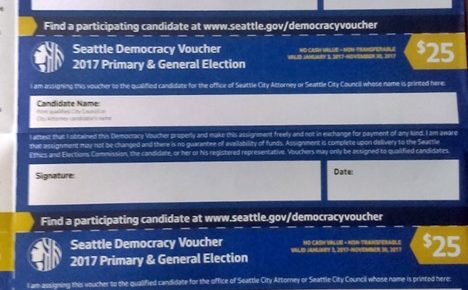 The Washington Supreme Court has rejected a challenge to the Honest Elections Seattle initiative (I-22), which created the city’s “democracy voucher” program. The public campaign financing program, instituted in 2015 and first used two years later, provides eligible Seattle residents with four $25 vouchers that they can use to support the candidates of their choice running for city office. Today’s decision in Elster v. City of Seattle upheld the legality of the program against a claim that it supposedly violated the constitutional rights of landowners.

“This is a huge victory for the people of Seattle,” said Ron Fein, Legal Director of Free Speech For People. “The democracy voucher program is a home run for both democracy and the First Amendment: it gives more people a political voice and encourages more people to run for office while silencing no one. The Washington Supreme Court rightly rejected the idea that empowering citizens is against the Constitution.”

“Today’s ruling is a victory for a democracy where the strength of our voices doesn’t depend upon the size of our wallets,” said Demos Senior Counsel Adam Lioz.  “Seattle’s innovative democracy voucher program helps ensure that a diverse range of residents drive local public election campaigns—not a narrow slice of the wealthiest donors, who are overwhelmingly white.  Seattle is a stronger, fairer democracy because of the voucher program. Cities and states across the country should move forward with similar programs now that the Washington Supreme Court has confirmed the clear constitutionality of empowering residents to direct limited public funding for election campaigns through ‘democracy dollar’ programs.”

The brief presented an empirical analysis showing that the democracy voucher program helped enhance both political equality and democratic self-government by enabling Seattle candidates, including women and people of color, to run for office without relying on wealthy (often out-of-town) donors.