Public Interest Groups to Deliver 200,000 Signatures to FEC Calling for Investigation of Russian Interference in 2016

The action by Rootstrikers, Free Speech For People, and CREDO Action follows last week’s launch of FECMustInvestigate.org, allowing grassroots activists to urge FEC commissioners to launch and prioritize this investigation.

With continued revelations about the extent of Russian interference into the U.S. election process – such as Tuesday’s report that Russian cyberattacks hit 39 states’ voting systems – the groups note that the Federal Election Campaign Act has a clear prohibition of foreign nationals spending money to influence federal, state, or local elections.

Additionally, the groups argue that the FEC has enough evidence to investigate whether Trump campaign advisors’ communications with Russian agents meet the Federal Election Campaign Act’s definition of illegal “coordination.”

“The Federal Election Commission must do its job,” said John Bonifaz, the Co-Founder and President of Free Speech For People. “It must investigate whether the Russian Government made illegal expenditures in the 2016 election, in direct violation of federal campaign finance law, and it must investigate whether the Trump Campaign illegally coordinated with the Russian Government with respect to those expenditures.  Americans across the country are demanding that the FEC live up to its responsibility to protect the integrity of our election process.”

“The American public will not sit by silently after a foreign power interfered in our elections – and neither should FEC commissioners, whose charge is to uphold the rules protecting the integrity of our electoral process,” said Kurt Walters, campaign director at Demand Progress’s Rootstrikers project. “By the hundreds of thousands, Americans are closely watching whether the FEC’s commissioners live up to their responsibilities by prioritizing an immediate investigation.”

“The FEC has both the power and the responsibility to investigate Russian interference in our elections,” said Heidi Hess, senior campaign manager at CREDO Action. “The American people deserve FEC commissioners who will use their power to defend our democracy, not play partisan politics to protect the corrupt fascist who leads the Republican Party.” 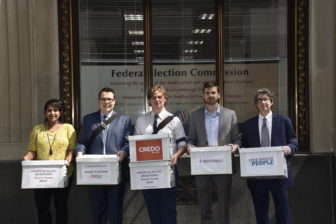 Members of CREDO, Free Speech For People, and Root Strikers deliver 200,000 signatures to the FEC.

The petition to FEC commissioners housed at FECMustInvestigate.org reads in part:

“It is the responsibility of the FEC to ensure the integrity of our elections. …  Please conduct a thorough investigation into whether or not foreign actors sought to influence the 2016 election through the purchase of Facebook ads, other paid social media, or targeted hacking, and whether any of this activity was coordinated with the Trump campaign.”

The petition from CREDO Action is available here.

In December, Free Speech For People and Campaign for Accountability filed a complaint with the FEC charging that the Russian government’s activities interfering in the 2016 election violated the Federal Election Campaign Act, which prohibits “foreign nationals” from spending money to influence federal, state, and local elections.

The complaint also argues that the FEC has enough evidence to investigate whether Trump campaign advisors’ communications to and relationship with the Russian government meet the Federal Election Campaign Act’s definition of “coordination.”

The report was later amended in May and then again in June as additional information emerged.

In recent weeks, one FEC commissioner has publicly called for the agency to investigate whether Russian agents purchased Facebook ads to spread misinformation, in violation of federal campaign finance laws.

The Federal Election Commission (FEC), which was created by Congress in 1975, is an independent commission charged with investigating and enforcing violations of the Federal Election Campaign Act, which regulates campaign fundraising, spending, and reporting. The FEC has broad investigative powers, including the ability to subpoena witnesses and documents and compel testimony.