On behalf of the North Carolina State Conference of the NAACP and several North Carolina voters, Free Speech For People filed a lawsuit in North Carolina state court challenging the new electronic voting system that Mecklenburg County and several other North Carolina counties rushed to implement for the 2020 elections. We filed this suit in partnership with the Lawyers’ Committee for Civil Rights Under Law and with the pro bono assistance of the law firm of Sheppard, Mullin, Richter & Hampton LLP.

The suit alleged the new system was vulnerable to security threats and its results were unverifiable, in violation of the North Carolina Constitution’s guarantees of free and fair elections and equal protection of the law. The suit also alleged that using this new system, the ExpressVote, was particularly perilous during the COVID-19 pandemic. The COVID-19 disease could be spread through contact with the touchscreen computer or other parts of the ExpressVote. Election Systems & Software, the company which manufactures and markets the Express Vote machines, claimed there are remedial steps which election officials can take to mitigate this threat. However, remedial steps, such as cleaning the machines after each contact by a voter, are time-consuming, difficult, and costly, and they can lead to long lines at polling places. Such cleaning can also damage the ExpressVote machines and is ineffective in eliminating the coronavirus if improperly done.

Voters cast their votes on an ExpressVote by entering their choices on a touchscreen. The machine then prints a piece of paper, featuring both a machine-readable bar code and some arguably human-readable text. (The text may not be human-readable in practice, due to issues such as small font size, and referring to ballot initiatives solely by their number rather than name, e.g., “ISSUE NO. 5 . . .. FOR ISSUE NO. 5.”) A scanning machine scans the bar code (not the human-readable text) as the official vote.

“The right to vote means the right to have one’s own intended choices recorded and counted, not the choices of a computer running an insecure, unreliable software,” said Courtney Hostetler, Counsel at Free Speech For People. “Voters who are required to use the ExpressVote voting machine aren’t just losing out on the right to vote—they’re also exposing themselves to a hard-to-disinfect touchscreen that may have been touched by hundreds of voters carrying a deadly virus that can live on surfaces for days. Only hand-marked paper ballots can guarantee North Carolinians a secure, reliable, and safe election.” 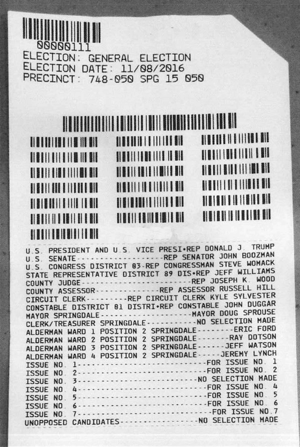 The barcodes can be miscoded or hacked without detection. The ExpressVote’s defects andsecurity flaws create the risk that voters in Mecklenburg County and several other North Carolina counties will have their votes cancelled or cast for the wrong candidate. Plaintiffs seek to stop the use of the ExpressVote by any of North Carolina’s counties, thereby protecting North Carolinians’ right to an accurate and equal vote.

The complaint detailed problems that have already occurred with the ExpressVote.  During North Carolina’s March 2020 primary election, ExpressVote machines were left in improper modes, utilized for types of voting for which the machines had not been authorized, and were responsible for improperly tabulating votes in at least one county.

Affidavits in Support of the Preliminary Injunction Motion