Building off of momentum from our  filing of the FEC complaint to end super PACs, we recently launched a new campaign in St. Petersburg, Florida, that could create another test case to challenge big money in our elections. On July 21, 2016, City Councilwoman Darden Rice of St. Petersburg introduced our proposed ordinance before the St. Petersburg City Council to abolish super PACs and limit spending by foreign-influenced corporations in city elections. 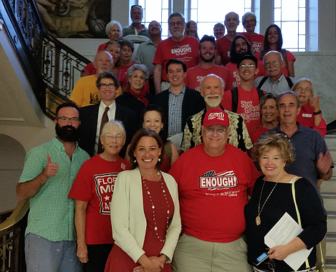 The proposed ordinance, the first of its kind in the nation, will establish limits on contributions to “independent-expenditure only” political action committees, known as super PACs, effectively abolishing super PACs in St. Petersburg elections. It will also require corporations that spend $5,000 or more on St. Petersburg elections to certify they are not owned or controlled in significant part by foreign entities.

A “Committee of the Whole” meeting will take place on Thursday, October 27 with testimony  and written letters of support presented to the City Council.  Our “I Stand With St. Pete” pledge campaign will continue to collect donations, and future actions will be updated on our new campaign site: www.defendourdemocracy.org .

II. In the News

Read letters in Support of the St. Petersburg Ordinance:

Since the Supreme Court’s 2010 Citizens United decision invalidated restrictions on corporate political spending, considerable public and policymaker interest has developed in the potential for U.S. elections to be influenced by foreign interests through U.S. corporations. On the one hand, existing federal law (the Federal Election Campaign Act) already prohibits political spending in federal, state, or local elections by corporations that are incorporated outside the U.S., or which have their principal place of business abroad. On the other hand, current law still allows substantial avenues for foreign influence over corporate political spending by U.S.-incorporated and -based corporations.